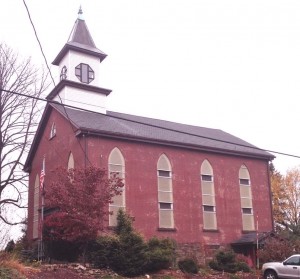 The series of events leading up to a local congregation making its new home in Bushkill Township is nothing short of a miracle.

The picturesque, red-brick church building, its quintessential steeple a landmark in the community for generations, was dedicated in 1873 as the Jehovah Union Church. The building was later converted into a private residence Wayne and Bonnie Guerro, who quietly ran a non-profit organization from the former house of worship nestled on the corner of Bushkill Center and Belfast roads, just opposite Beck’s Land and Sea House.

In the fall of 2013, the Guerros, who had collected a number of antiques over the years, were holding an estate sale. When a member of Faith Family Fellowship stopped by to browse the many treasures, she happened upon a small note tacked to the wall. The note – no bigger than a post-it square – said simply, “Church Building for Sale.”

And it just so happened that Faith Family Fellowship was in need of a church facility.

That encounter launched a series of conversations and visits to the property, and in a November 2013 letter to his congregation, Pastor Bob Hampton wrote,

Faith Family Fellowship ultimately held a candle-light Christmas Eve service in the former church building – it was technically still the Guerros home at the time.  It was a good way for the congregation to try the building on for size, Hampton recalls, but the timing just wasn’t right, as the process would involve a rezoning process to convert it from a residence back into a church. While the local township officials were open to the idea – enthusiastic, in fact – Hampton says, the risks involved with taking on the complicated process of rezoning the property and converting it from a residence back into a church was more than his small congregation could assume. Reluctantly, the Guerros listed the property at 1002 Bushkill Center Road with a realtor and Faith Family Fellowship continued their search.

And then, one Saturday a couple of months ago, Hampton got a phone call.

It was a call from the Guerros, he claims, that was nothing short of a miracle. If Faith Family Fellowship was willing to cover the closing costs, the Guerros told Hampton, the church building would be theirs, free and clear, a gift from the Guerros and an anonymous benefactor who had come alongside them.

We continue to marvel at the series of events that followed the gift of a permanent home for this congregation, and the miracles continue. As the good news of Faith Family Fellowship’s new home spread to friends in the community, there were more donations – paint, mulch, and building materials for much-needed renovations.

Even the issue of parking – there is none – was  resolved through an agreement with Jennings Transportation for parking spaces on Sunday mornings as well as additional spaces, if needed, at Beck’s Land and Sea House.

Many in the community have shared with Pastor Bob Hampton and other church members their eagerness to visit the church, as they have relatives – in some cases generations removed – who were baptized or married there.

Pastor Bob’s message to his flock…

“To whom much is given, much is required.”~ Luke 12:48Luke 12:48
English: World English Bible - WEB
48 but he who didn’t know, and did things worthy of stripes, will be beaten with few stripes. To whoever much is given, of him will much be required; and to whom much was entrusted, of him more will be asked.